What a rhetorical question to start a book with. I started thinking right away: is that achievable by a combination of web development and affiliate marketing, or perhaps by developing your own product and selling it to big businesses? Actually, none of that turned out to be the case. 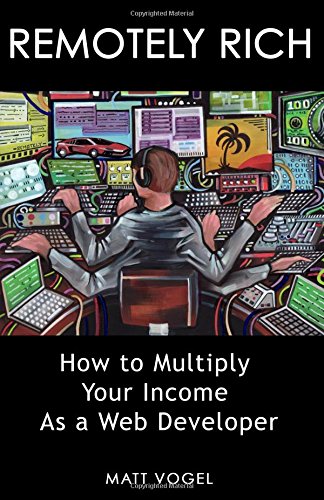 In his book Remotely Rich, Matt Vogel is sharing his practices and experiences of being a freelancer web developer working from home. But how can he make almost half a million dollars a year? The secret turns out to be more prosaic than you might think. Matt is saying that by managing his time properly and by cutting out all the disruption that is present in an office environment he is able to work three full-time jobs. And because freelancers tend to be paid more than regular workers the numbers add up. I’m pretty sure that anyone who ever worked in an office can testify that a significant portion of the day is spent in a breakout area – drinking coffee, tea or some other source of caffeine and sugar while discussing last weekend and planning the next one.

In contrast, Matt focuses on maximizing effectiveness. It’s not easy and he is painting a very realistic picture of what it takes to be a freelancer. Matt admits it can be difficult sometimes and occasionally it involves working crazy hours to meet a deadline. However, I could not help myself but think that, in one form or another, most of the challenges of being a freelancer is present at regular jobs too. Working on the weekend? Check. Do managers have unrealistic expectations or imperfect knowledge about the state of the project? Most of the time. I’m not saying that working in a nine-to-five job and being a freelancer are the same things, but there are similarities for sure. Probably handling clients is the biggest challenge that you don’t have to bother with when you are working for a company. I see that not every programmer would be willing to do that. However, maybe it would worth to git it a try given how financially rewarding freelancer life could be. There are some valuable tips and techniques in the book regarding how clients should be handled.

Matt in his book is being very practical and tells us about a lot of things from choosing office space down to personal hygiene (really). There is a section dedicated to advises on tax and financials. Because he is living in the US this section is less helpful for us who work outside the States. Although every developer should think about what to do with the money earned. Invest in stocks, bonds or index funds? Buying a real estate is an option too. Developers who are not confident with financials should seek professional advice.

Remotely Rich is not a long book to read. It’s very practical and down-to-earth. This book is more about core soft skills than programming techniques. I definitely recommend it to anyone who is thinking about starting a career as a freelancer web developer.

Amazon: Remotely Rich – How to Multiply Your Income As a Web Developer

Recently I was given a task to implement a new use case in a fairly old Java application. The task didn’t seem to be interesting at fist. There was an existing method to fetch a Task entity by its ID from a database and then it was enriched with a list of Owners fetched by the foreign key stored in the owner table. No Hibernate or another persistence framework was used at all. The underlying Sybase ASE database was accessed using plain old java.sql.PreparedStatement and the method in question looked something like this:

The getTask(Long) functionality was exposed as web service. It worked reasonably well for many years until a new client application started calling this service in a loop to get back multiple tasks by a list of IDs. The task table contained approximately 1 million rows each task having 2-3 owners on average. The performance was horrible, it took around 60 seconds to get back 20+/- tasks with their owners.

I said: “Nothing is easier, I’ll do it in a batch plus I’ll pre-fetch all the owners in one call!”. There was one little hiccup namely that java.sql API does not support passing down a list of parameters to use them in an IN (…) clause. “No worries, I’ll implement a helper function to generate as many parameter placeholders (?) as needed and then another for setting a value for each of them”. So, my initial solution looked like this:

The performance was much better. But still, it took 10-15 seconds to get back the results for the same list of IDs as before. It was very suspicious given that the same queries executed from a desktop SQL client returned under a second. Then I started thinking: “How does that prepare statement work?”. It turned out that in Sybase ASE prepared statements are compiled into a stored procedure. Which obviously takes time plus the number of input parameters (number of IDs) varies between invocations and that cripples the reusability. The solution I came up with was to fall back to use a simple java.sql.Statement with hard-coded values:

With these modifications and proper indices, the queries return data in 50 – 60 milliseconds which is a 1000 fold improvement compared to the initial state – don’t take this the wrong way but I think it’s pretty cool.

One thing to note: parameterized prepared statements are often used to prevent SQL injection – or at least make really hard for hackers to pull off one. Using a simple statement is less secure but in this case the IDs are converted into Long values before they are passed down in the query. If we were to use String parameters we would have to take additional measures to make our code more secure.

To summarize my little story I think the takeaway message is that interfaces are good, but when it comes to performance optimization you have to brace yourself and look behind the curtain.

What should a developer with a full-time job do on his day off? Of course, to grab his laptop and head to the nearest co-working space to work on a side-project. Let me share my experiences about working a full day at Kaptar (bee hive).

Kaptar is located right in the center of Budapest within walking distance from major sights like the Basilica or the parliament. It’s not a big place but you have everything you need: tables, meeting rooms up to 12 people, sound proof boxes for skype calls. I can definitely recommend the table counter, there is also a kitchen (with very good coffee) and even a shower which is very handy if you ride a bike. Kaptar has a very nice modern atmosphere with a Scandinavian twist to it.

Kaptars DNA is not defined but its superb location or by its cozy furniture, but by the people who work there. I had a chance to meet interesting people from Toronto, Russia, and Germany working on very different projects. The staff is extremely friendly and they really go the extra mile. Kaptar isn’t just about strangers working in the same space but about creating a community. Every day a so-called community lunch is organized where you have a chance to know your co-workers a little better. The staff even ordered lunch for us all I had to do is to select 3 courses from a menu.

Kaptar offers a wide range of services. You can reserve a meeting room in case you have an important client to meet. Believe me, it’s much better than a noisy coffee place. There is a possibility to prepay for fix places, but Kaptar is very friendly towards occasional co-workers too. You can pop in any time you wish even only for half a day. So, what are you waiting for? Grab your notebook, phone and whatever else you need during your daily work and give Kaptar a chance.

“A good architecture maximizes the number of decisions not made.”